Selma 50 Observance- “We Knew God was with Us” 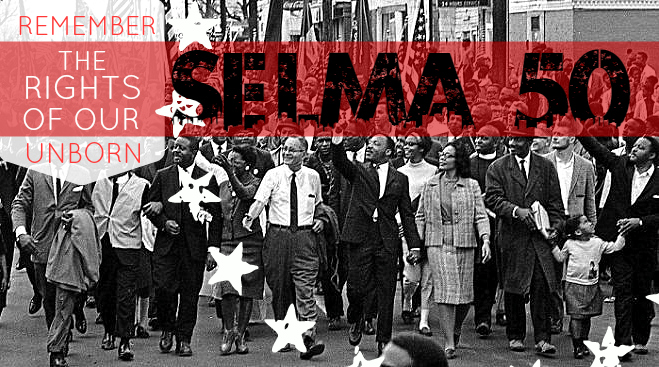 Hundreds of people from around the world will gather at the Selma 50 observance on Sunday.
People were marching for the right to vote back then. Hundreds of us will march to commemorate the price many paid, some with their lives, for the right for African-Americans to vote.

I will be marching and praying also for America to wake up to the fact that since 1973 over 55 million babies have been legally aborted in America. They died before they were able to grow up and vote. There is a connection here. As my Uncle ML once said: “Injustice anywhere is a threat to justice everywhere.” I remember my Daddy A.D. King coming home from Selma 50 years ago and telling us how bad it was. By that time, we were already well versed in the strategy of nonviolent protests, so we weren’t overly shaken by the events, even though I was just 14 years old.

We weren’t afraid. We knew God was with us. We had to remain nonviolent and trust God. My mother, Naomi Ruth Barber King, an activist in her own rights, has befriended the daughter of Viola Liuzzo who lost her life in Selma shortly after Bloody Sunday, while she was helping protesters. Mother often talks about the courage of those who fought so valiantly that day.

Back then, all protesters were trained in method of nonviolent conflict resolution before going out to march. We all even signed a covenant to follow the ten commandments of the civil rights movement. We never knew if we would live to see another day. We just kept trusting and believing.

The first commandment was “Meditate daily on the teachings and life of Jesus.” The rest stressed following those teachings through nonviolent protest. I didn’t march with Daddy at Selma. However, I had already first put my training to the two years earlier when I participated in the 1963 Children’s Crusade March in Birmingham. That same year, on May 11, 1963, our home was fire bombed.

What I remember most about the bombing is my daddy calming down the ensuing riot.

Daddy grabbed a bullhorn and stood on top of a car and said “Don’t fight back; don’t throw rocks. If you’re going to kill somebody, kill me; but I’d rather you pray.”

Years later, after the assassination of Martin Luther King Jr. in 1968, Daddy used his words not to calm a riot, but to calm his daughter.

I was of course devastated by Uncle Martin Luther’s murder, and even went so far as to want to hate someone. But Daddy helped me to stay focused on nonviolence: “Alveda, White people marched with us, prayed with us, and died with us,” he said. “The devil killed your uncle.”

My daddy, the Rev. A.D. Williams King Sr. and my famous uncle MLK, my grandparents MLK senior and Alberta Williams King, and even my great grandparents were all Christian leaders who embraced the love of God, and nonviolent conflict resolution. One of the family’s major scripture foundations is derived from Acts 17:26: “Of one blood, God created all people to live on the earth.”

A year after the death of Uncle MLK, Daddy was found dead in our swimming pool. While there was no water in his lungs, the cause of death was labeled as a drowning accident. Somehow I found the strength to carry on the King family legacy by faith in God and his love.

Today I continue to fight for civil rights and am involved today, not only for continued racial equality, but for the rights of the unborn child. That’s why on Sunday, I’ll be remembering Daddy and Uncle MLK, thanking God for the right to vote, and asking God to save the babies.